As I flew through African skies,
Low over forest and endless sand,
And hoped that soon the sun would rise,

I heard whispered politicians' lies;
The sound of hatred being fanned.
As I flew through African skies,

Skies of unimaginable size,
I saw only darkness across the land,
And hoped that soon the sun would rise,

And burn the bitterness from dreadful eyes.
That have seen what man should not withstand.
As I flew through African skies,

Closer to the place where all hope dies,
Closer to the land where hope is banned,
And hoped that soon the sun would rise,

The tears would dry and the people rise,
And claim back their glorious, beautiful land,
As I flew through African skies,
And hoped that soon the sun would rise,

The Day Before the Flower Show, Chelsea, 2012

Inside, a sea of fluorescent yellow.

Some wear their hi viz as of old, work-worn, well-worn,
building walls, hauling timber, driving fork-lifts or
crouched at a flower bed, placing a delicate plant with delicate precision;
some wear their hi viz with surprise, awkwardly, over designer couture.
In two days, emerging from their hi viz cocoons,
the King's Road butterflies will meet the Queen or Alan Titchmarsh.
Inside, they practice their greetings and speak the word "Chelsea" with awe.

Outside, a sea blue and white.
Football fans, triumphant in Europe, 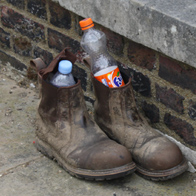 wear their hats and wave their scarves and drink from cans.
Outside, they chant "Chelsea" with abandoned joy.

While abandoned at the gate, work boots, muddied and limp,
celebrate freedom for someone's feet.
My feet throb with envy.

We looked out for roots that might catch our boots,
While we ran through the trees, feeling totally free,
On Blackdown where the whortleberry fruits.

That glorious summer we worked in cahoots
Picking whorts for our mum to make pie our tea.
We looked out for roots that might catch our boots,

Where blue-rinsed ladies in trouser suits,
Took their poodles and labs for a countryside pee,
On Blackdown where the whortleberry fruits.

"Come to heel!" they'd shout, but off the dog shoots,
For the smell of the ferns and the buzz of the bee.
We looked out for roots that might catch our boots,

While scrambling up trees for secret cheroots.
My brother called down from aloft to me,
(On Blackdown where the whortleberry fruits)

"You can see the sea from the top of this tree,"
But I'm pretty sure he was lying to me.
We looked out for roots that might catch our boots,
On Blackdown where the whortleberry fruits.
and now I
share
the air you
breathe

and feel your heart-beat
in my sleep

Your nakedness entwined with mine
Your breath gentle against my neck
You sleep while I smile, thankful, awed.

Numbness sets in
We stir
Your skin moves against mine
And we settle again.

I should sleep
But that would be to waste these precious hours
Of your nakedness entwined with mine.

This morning I awoke in a world of magic.

As the set is the first idea,
so the set of all sets is the last,
and Absolute Infinity is its number.

A youthful Bertrand Russell proved that
the set of all sets is not a set
and the number of things it contains
is not a number.
But these ideas would not be wished away
and other mathemagicians
wished them back.

“Let there be Absolute Infinity,” said one.

“Let it be axiomatic and let its name be Ω.”

“Let there be a set of all sets,” said another.
“Let it be axiomatic and let its name be On.”

Therefore it was to On that I offered a
word of thanks when,
this morning,
I awoke in a world of magic.

The crazy Polish chemist offers me his pipe,
He flicks his Zippo and the flame flares, the flame flares, the flame flares.
I breathe the pungent herbs, eyes closed, flaring flame in negative.
Following instructions, I count, slowly, 1,
let the smoke fill me, 2,
the flare behind my eyelids colours, 3, fractures,
and I'm headlong into the colours, 4, 5,
6, the colours take shape, distorted, surprised, expressing their own, 7, mind
for me to, 8, witness or, 9, not.
10 and I exhale a noisy stream of smoke;
the sound of my breath a solid object amongst the colours.

Nora speaks to Tad, the crazy Pole, and her words billow green,
Tiny tendrils of her cloud reach across the room to him,
He replies in turquoise.
Their words meet, mingle, make fractals, complex and more complex still
Until blown away from below by Valentino's deep amber gust.
Malcolm laughs in rich red-gold, tasteful as Farrow and Ball,
Bob's silver comments melt to quicksilver, trickle over me, make me smile, and Ximena's giggle pours diamonds from a black velvet bag into my black velvet darkness.

Silken at my neck
You fold
I lose myself

Sashimi on my tongue
You melt
I drink you in 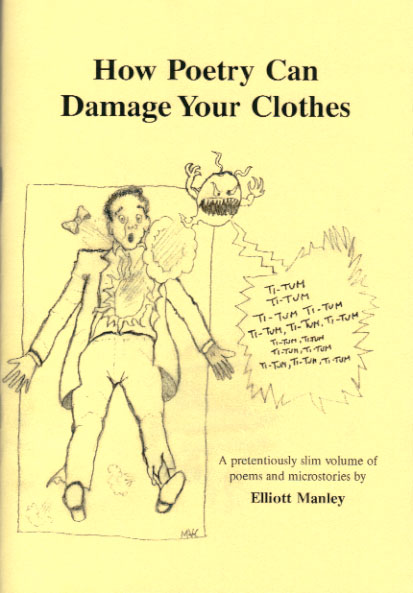 How Poetry Can Damage Your Clothes